Get Out of the Boat!

Pastor Lorne’s msg on Sunday was a continuation of his last msg – Jan 29th blog entry: Are you Overwhelmed? But first, let me start off by admitting what I knew all along but others have just discovered – I can’t add!

It’s not like Pastor Lorne came right out and said I couldn’t add, because he’s too nice a guy for that. No, he just started the msg on Sun by restating what he’d said before. Suddenly a light bulb went on and I suspected I hadn’t added properly. I have since added a note to that blog entry reflecting this. Sorry for the mix-up. (Writing is my forte – not math!)

So on Sunday, Pastor Lorne gave further explanation of his ‘Are You Overwhelmed?’ msg saying that if you take a huge task and break it down into smaller tasks, then it won’t seem so overwhelming. He went on to suggest it’s possible that’s what Jesus had intended by dividing the multitude into groups of 50 or so people each. It wouldn’t have seemed like such an overwhelming task that way.

Pastor Lorne said that after the miracle of feeding the crowd, the people wanted to take Jesus and make Him their King (John 6:14-15). So Jesus sent his disciples, by boat, to the other side of the lake, then he dismissed the crowd and went off to pray, alone.

Pastor Lorne asked if we knew that this is the greatest time of temptation – right after we’ve done something great for God and we’re on an emotional ‘high’. Beware of this time. Is it possible that this is why Jesus went to be alone and pray? To be away from the adoring crowds and accolades? 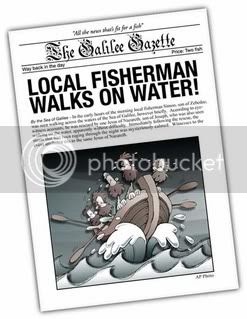 Sometime between 3 and 6 AM (the fourth watch), Jesus walked out – on the water – to the boat. Pastor Lorne asked us to imagine the scenario: the boat - buffeted by winds, the disciples – straining at the oars or bailing water trying to keep it afloat, and then in a flash of lightning, someone sees Jesus walking toward them! They were 3-3½ miles out in the middle of the lake and He’s walking toward them!

Pastor Lorne said he wishes he could walk on water when he’s out fencing, but usually he just sinks in the mud!
But Jesus was actually doing it! Matt 14:26 says, “When the disciples saw him walking on the lake, they were terrified. "It's a ghost," they said, and cried out in fear.” Jesus immediately identifies himself, telling them not to be scared. Peter took the words to heart because in verse 28, Peter replies, "Lord, if it's you…tell me to come to you on the water." Jesus answered in verse 29: “Come," He said.”
With that simple word, Peter got out of the boat and started walking on the water to Jesus. Pastor Lorne said that of all the people mentioned in the

Bible and throughout history, Peter has the distinction of being the only person to actually walk on water. Yes, he sank when he noticed the wind and the waves, but that was after the fact - after he started thinking about what he was doing – after he lost his faith. When Peter allowed fear to creep in, the Bible says he (v 30-31) “cried out, "Lord, save me!" Immediately Jesus reached out his hand and caught him. "You of little faith," he said, "why did you doubt?"

Pastor Lorne said, “We need to get out of the boat”. It’s time to do something we’re not used to doing. To do something that’s hard for us to do. To go out on a limb.

Peter didn’t need to get out of the boat, but something called him out.

In our lives, we need to walk on the water a bit sometimes. To muster our faith.

While Peter kept his eyes on Jesus, he didn’t sink. This is a recurring story.

Do you need to walk on water? Step off the boat and step out in faith? That takes courage! A stretch of faith!

Pastor Lorne says if you ever have to face something – get out of the boat! Jesus is waiting with outstretched arms to catch you. Whether it’s now or in the future, in whatever your life’s situation, Jesus will be there waiting. And even if you feel like you’re sinking, He’s still waiting saying, “Come to me” to lift you up and carry you back to the safety of the boat.

Pastor Lorne finished the message with this question: Is Jesus calling you to get out of the boat?

Whatever your situation, God will give you the grace and faith to deal with it.

If you would like to speak to Pastor Lorne about this post, please use the contact info at the bottom of the right column or leave a comment.
Posted by Anita, a member of Church on the Hill at 2:30 PM

Hi Anita
I am looking for a Pastor Lorne who was once located in Toronto at a church called the FOuntain of Faith or something to that effect. I was wondering if this is the Pastor Lorne that i am looking for. If there is anything you could help me out with I would really appreciate it. Email me at h.dominguez@utoronto.ca whenever you get the chance. Thanks a million
Hazel

Hello Hazel, I rec'd your msg last week and did pass it on to Pastor Lorne and his family.