For the past couple of years Pastor Lorne has talked of putting on a live Nativity using real animals and the local auction mart as the venue. Having it at the auction mart would solve 2 of the biggest problems of holding it in a church... the mess caused by live animals, and how to bring the message to people who don't normally attend church. In plain English, we wanted to bring a mess to the masses. Since I had enough writing on my plate and no animals to contribute, I stayed out of the discussions... until the day Pastor Lorne showed up at my door asking for my ideas. By the time he drove away, he had a handful of my suggestions, and I'd agreed to write the script - with all of 4 weeks to showtime.


The Auction Mart sits at a crossroads near a small hamlet - kind of in the middle of nowhere. In the photo above, the lunch room is the left half of the green building, the auction ring and seating is on the right half, and the red building is the barn where the animals are kept before and after they appear in the show ring. Yet even with this obscure location, people from towns away were asking when the big event would happen. A few days before the date, a trucker out in the oil patch asked my hubby what time the show would start. The same was happening wherever church members appeared in December. Pastor Lorne's wife, Dianne Bonk, said the event was taking on a life of its own. Hallelujah! Dianne held a sewing bee at her farm and three women from our church showed up. By the end of the day, all the costumes were sewn, and/or assembled. Thank you, Dianne Bonk, Anne Pelletier, Karen Hoffart, and Shirley Johnson.

Meanwhile, although a different denomination, the Kevin Czerwonka family waived the fee and offered the free use of the auction building for the Nativity portrayal. This event could not have gone on if not for the generous support of the Czerwonka family. Not only did Kevin give us the building for the day, he helped moved the stable in place. Personally, I'd like to give a big shout out to Kevin because of all the auction buildings I've been in, this is by far the cleanest auction mart I've set my feet and nose inside.


Thanks go out to Wayne Dielschneider and family who built this fantastic stable for the presentation. Since most of our church family are farmers, there were more than a few people interested in checking it out. Wayne and his son also worked the huge spotlight Pastor Lorne brought out from Regina for this production.

As well as helping with the sewing, set-up and narration, author Shirley Johnson volunteered to create the backdrops. I requested a backdrop for The Jericho Road through the Valley of Jordan, a second one showing The Inn, and a third one showing the starry sky for when the angel appears to the shepherds. But how to hang the backdrops? We decided on transporting an office divider from the church to the auction mart with a backdrop on each side. As one scene finished, the divider would be turned to the next backdrop. However, that all changed when we finally had access to the venue on the day of the performance and realized the safety fence would serve adequately.

The safety fence is a heavy iron set of panels designed to block the animals from entering the back room which is also the entrance to the auctioneer's booth, situated beneath the clock in the above photo. The backdrops were painted on heavy craft paper, then a portion hung over the top bar and pinned in place. The backdrops were then covered by heavy brown fabric and Nelson Draper was detailed to stand behind them and at the appropriate time, and cover or uncover what was needed.

A big 'Bethlehem Inn' sign also helped set the scene in case the crowd didn't recognize the inn.
The light was kind of big for our small production, but it did what it was supposed to do which was to highlight specific parts to the exclusion of all else. For example, when Joseph walks in leading Mary on a donkey, all eyes were attuned to this single event.

A final touch to set the stage was the hanging of the starry sky with the bright star which was accomplished by using a navy sheet and mini-lights. If we do this next year, though, we'll try to use more sheets as we really liked the effect. Hanging it was kind of scary though as one of the guys balanced on the top rail of the safety fence while doing it.

One of my ideas had been to use the high bleachers Stage Left for the Heavenly Host. As it turned out, the building was packed and the audience began to fill in behind the angels...

...but the spotlight worked really well because only the angels portraying the Heavenly Host were visible during the performance.

The spotlight really make them appear to be 'in the sky' when the spotlight shone on them.


Although this project was hectic and stressful during its creation process, like all Christmas pageants, it worked out in the end and showed God's glory as a babe in a manger. More people saw our paltry rendition of this inspiring tale at the Auction mart than could have fit into our small church.

Yes, my cameras focused on the white bars instead of the characters behind it, but in real life, the bars were soon forgotten as we watched the age-old story unfold. I never get tired of watching a Nativity play, and from the people attending this performance and the accolades afterward, the bars didn't seem to matter, either. When it was over and the adults and older kids had gone to the lunch room where Dennis and Doris Borowski gave out coffee and hot chocolate, the little ones were allowed into the ring to get to know the animals. Wrangler Pauline Long-Wright and Youth Leader Noelle Bonk showed the little ones how to feed the critters and in some cases, sat the kids on the gentle animals. This impromptu petting zoo was very well received by kids and adults alike. 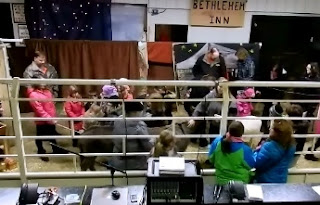 More information  can be found on our Glenavon church website Live Nativity page. There are some people missing, such as Brooklin who played The Angel of the Lord, but that part was recorded on my camcorder and I have to figure out how to transfer the recording into my PC. Hopefully more photos and the video will be posted soon. I'll let you know.

Don't forget to check out the Church on the Hill Facebook page as well. And I've missed someone who helped with this project, it sure wasn't intentional. Send your name to me right quick and I'll add you to the list. Thank you to everyone who helped in any way to make this night a success. We couldn't have done it without you.

Have you ever been to a Live Nativity? Did you attend What's Happening at the Barn? What did you think?
Posted by Anita, a member of Church on the Hill at 2:36 PM No comments: