Extreme Makeover of our Heart 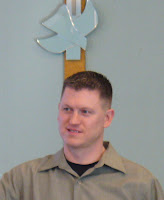 We didn't get to church to hear Pastor Lorne speak yesterday, so here is last week's message:

Darryl said he wanted to talk about the concept of extreme makeovers and the changes which happen to your body as you get made over. He said he spent a little over 10 yrs as a youth pastor prior to joining the RCMP. The kids liked snowboarding and since he’d grown up skiing in Ontario, the kids tried to get him to join them. Darryl said he picked it up fairly well, but on a snowboard you can either fall forward on your wrist or flat on your back unlike skiing where you can fall anyway. And as the day wore on – although having fun – it took him a toll on him. It also took him weeks to recuperate after and his wrists hurt for a couple months from landing on them. He said he’ll stick to skiing. 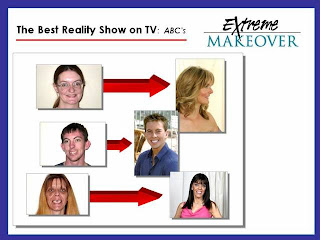 Darryl asked how many have watched the Extreme Makeover shows on TV – the ones where they show a before picture where the person has no makeup, bad hair and worse clothing. Then they bring in the best dentist, makeup artist, clothing designer, cosmetic surgeons, etc with an end result of a completely different person.

But, he says, we can all look great if we are given the best of the best. We’d all like to make changes even if it’s a slight modification. Getting old is a part of life but you see people grasping at the fountain of youth. They try to hold off getting old. And they look for the quickest fix to look younger like using cosmetics to create a six-pack. (laughter)

Darryl said if you look in the Bible, God wants us to have an extreme makeover as well. 1 Samuel 16:7 says, ‘But the LORD said to Samuel, "Do not consider his appearance or his height, for I have rejected him. The LORD does not look at the things man looks at. Man looks at the outward appearance, but the LORD looks at the heart." God had sent Samuel to anoint the king of Israel and Samuel was looking at a strapping young man but God said no – not to look at the outside but inside to the heart. Darryl says as we look through the Book of Colossians, we see that it starts by talking about doctrine then switches to conduct and how we are to live our lives.

We can have an extreme makeover of our hearts first of all by looking up. He said Col 3:1-3 says, ‘Since, then, you have been raised with Christ, set your hearts on things above, where Christ is seated at the right hand of God. Set your minds on things above, not on earthly things. For you died, and your life is now hidden with Christ in God.’

Darryl reminded us of those old hockey shows like Don Cherry’s Rock ‘em Sock ‘em and Hockey’s Greatest Hits, etc., where the player is skating down the ice with his head down and he’s focusing on the puck on his stick and the goal before him. He’s so intent he doesn’t see the guy coming from the side and bang (smacks hands together) he lays him out flat on his back. If you keep your head down, you can’t see what’s coming. And if we focus too much on our old world, we’re headed for trouble.

Col 2:20 says, ‘Since you died with Christ to the basic principles of this world, why, as though you still belonged to it, do you submit to its rules.’ Darryl said it doesn’t mean you’ll never sin again or that you’ll ever do anything wrong, but it means the cover of sin over us has been broken. And that’s why Paul says we need to set our minds on things above. If our minds are too focused on what’s going on in the world and if our sights are set in this life, what good are we for heaven. But if our eyes are set on heaven and we’re looking up and our sights and goal is on heaven, then that’s when we’re the best earthly good. If we truly set our sights on heaven above, we will experience power and freedom here on earth. As our feet are on earth and thoughts in heaven, our thoughts will influence the steps our feet take here on earth. 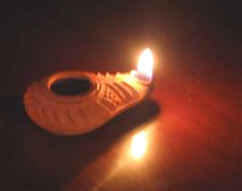 Psalm 119:105 says, ‘Your word is a lamp to my feet and a light for my path.’ Darryl said he heard that years ago they had these lanterns they’d put under their feet and it would light the path but they could only see straight ahead. Sometimes as we read our Bible and keep looking up, we can’t see what’s coming ahead but God will light our path. He will give us the next step. Sometimes when we get worried and frustrated, we tell God we don’t know what’s coming up the road. We pray and ask Him to tell us. But faith is one step at a time. If we’re focused on God, He’ll show us the steps to take.

You can also have an extreme makeover of your heart by looking out. Col 3 5-9 says, ‘Put to death, therefore, whatever belongs to your earthly nature: sexual immorality, impurity, lust, evil desires and greed, which is idolatry. Because of these, the wrath of God is coming. You used to walk in these ways, in the life you once lived. But now you must rid yourselves of all such things as these: anger, rage, malice, slander, and filthy language from your lips. Do not lie to each other, since you have taken off your old self with its practices.’ Darryl said that even though we put aside our sinful nature, it doesn’t mean sin won’t creep up and try to get a grip on us again. But when sin comes knocking, ask Jesus to go open the door for you because if you let it in just a little bit, it’ll get a wedge in there and push it open.

Darryl said if you look at that list, you see anger but anger by itself isn’t a sin. Even Jesus became angry when he went among the money mongers in the temple. Rather, it’s what you do when you’re angry. Ephesians 4:26 explains it this way, ‘"In your anger do not sin": Do not let the sun go down while you are still angry.’

So when you take all these things of this earth, don’t just set them aside but put them to death and forget about them once and for all.

He said one way he likes taking inventory of his own life is by following what the psalmist says in Psalm 139:23,24 ‘Search me, O God, and know my heart; test me and know my anxious thoughts. See if there is any offensive way in me, and lead me in the way everlasting.’ He said we all have skeletons in our closet, things we’re not proud of, things we don’t want publicized. So start each prayer by asking God to search you and He’ll shine the holy light of His Spirit on the spots that are coming between you and Him.

The third way to have an extreme makeover of your heart is by looking in. Col 3:9,10 says, ‘Do not lie to each other, since you have taken off your old self with its practices and have put on the new self, which is being renewed in knowledge in the image of its Creator.’ Darryl says this isn’t a commandment that they’re telling us. This is a truth. When you put off your old sinful nature, you will receive a new self, ‘renewed in the image of its Creator’. God made us in His image. Sin marred it and changed it.

Darryl has a book he’s read several times called, The Father Heart of God by Floyd McClung. It’s a book that talks about how the image of God has been marred in our lives. And of how when people look at us, they don’t really see that image of God like they should because it has been marred. As we work through our Christian life, we see the concept of how God reforms us back into His image. God can take us and transform us back in his image so when people look at us, they don’t see us – they see Jesus looking back through us.

Lastly, we can have an extreme makeover of our heart by looking around. Col 3:12-17 says, ‘Therefore, as God's chosen people, holy and dearly loved, clothe yourselves with compassion, kindness, humility, gentleness and patience. Bear with each other and forgive whatever grievances you may have against one another. Forgive as the Lord forgave you. And over all these virtues put on love, which binds them all together in perfect unity. Let the peace of Christ rule in your hearts, since as members of one body you were called to peace. And be thankful. Let the word of Christ dwell in you richly as you teach and admonish one another with all wisdom, and as you sing psalms, hymns and spiritual songs with gratitude in your hearts to God. And whatever you do, whether in word or deed, do it all in the name of the Lord Jesus, giving thanks to God the Father through him.’

These are all qualities we need to possess to be Christ-like or as Darryl likes to say - 24/7 Christians. 24 hrs a day. 7 days a week. 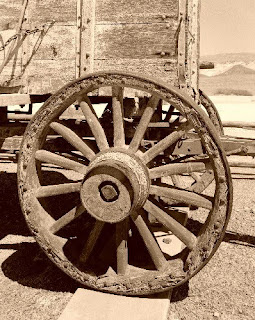 So we can have an extreme makeover of our heart by:

God wants to do an extreme makeover of your heart. He wants you to be a different person. Outwardly, you’ll look the same but your face will radiate with His presence. God wants to do a work in each one of our hearts, today.

If you would like to talk to Darryl or Pastor Lorne about this topic, please email.
Posted by Anita, a member of Church on the Hill at 12:35 PM No comments:

Pastor Lorne has been released from the hospital and has been told to take it easy at home.

He is planning to deliver Sunday's message. *grin
Posted by Anita, a member of Church on the Hill at 2:37 PM No comments:

It was a good thing we already had Darryl Hawbolt scheduled to deliver the message today because after weeks of not feeling the best, Pastor Lorne has become a patient at the Wolseley Hospital due to Mono and Quinsy (throat closing). He hopes to be home in a day or so.

Meanwhile, please pray for his healing.

Also, please remember to pray for the people mentioned in the Prayer List. The list doesn't signify only those who need or want prayer, it's people who have either requested prayer for a specific reason., or had someone request prayer for them.
Posted by Anita, a member of Church on the Hill at 3:08 PM No comments:

Church on the Hill has a new website. You can find it at

There's a menu and if you click on the 'blog' you'll be taken here.

You'll also be taken here if you click on the sunrise photo that says 'Prayer Needs'.

But I'm still working on the other pages so if you click on them, you won't really go anywhere.

Also, you might see ads popping up and that's because I'm still working with our host, Bravenet to give us the best price possible. So just ignore the ads for now.

Anita.
Posted by Anita, a member of Church on the Hill at 3:11 AM No comments: