Here are a couple more YouTube Videos from when Joey Theriault visited Church on the Hill on Feb 20th, 2011.

Thanks.
Posted by Anita, a member of Church on the Hill at 6:41 AM No comments:

On Sunday, Feb 20th, Church on the Hill was blessed by a special music service as Joey Theriault of Wolseley shared some beautiful old time hymns and gospel music.

I filmed the event for those of you who couldn't be here in person, so here's my first attempt at a YouTube video with Joey singing I'm the Lamb the Shepherd Left the Flock For:

Let me know if you'd like to see more of Joey's songs.
Posted by Anita, a member of Church on the Hill at 5:37 PM No comments:

Friday night we gathered at the church for the 2011 Valentine's Dessert Auction to raise funds for COTH Youth. A total of $1,020.00 was raised which is average for this fundraiser. Although there were many more desserts and non-food items to auction off than other years, overall bids were down so if you weren't in attendance, you missed out on some very delectable deals. 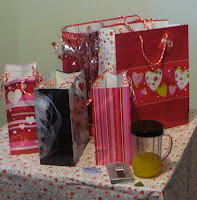 Let's set the stage, shall we... the youth spent Monday night decorating the lower level of the church in preparation for the big event.

Everyone who came put there name in for a door prize:
A small buffet was laid out to munch on while we listened to the evening's entertainment. The centerpiece display consisted of a fruit platter with 2 fancy birds made from apples. The story goes that Dianne destroyed several birds in her attempt to produce them. Frustrated, she finally phoned Allen and asked if he knew how. He said yes. Here's a photo of one of them, albeit half-eaten. Asked if he destroyed any apples while attempting his masterpieces, Allen grinned and said, 'Around four'. It seems lessons in this art form will not be given out until the teachers get their technique down. (smile) 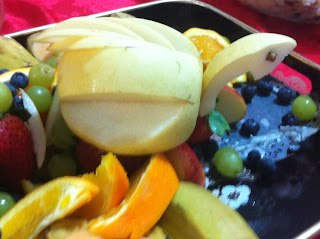 Entertainment for the evening was provided by Carla Taylor and Lori Rey from Wolseley. 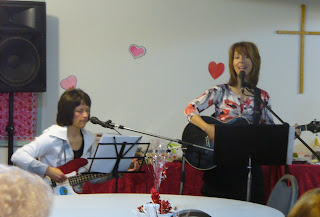 Carla And Lori played and harmonized over a selection of western love songs and then sang some good old gospel tunes.
Pauline Long Wright was our auctioneer of the night. I didn't know Pauline had the gift until she started belting out the bid requests. I'm not sure where she trained for the job, but she learned her lessons when it came to browbeating and snappy comebacks. She was no slouch in the pleading department, either. Here's Pauline at work: 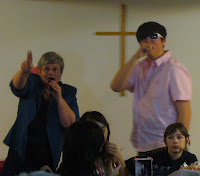 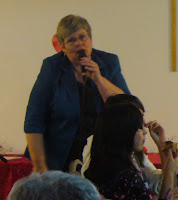 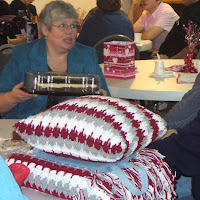 Not content with calling the shots from the front, Pauline got up close and personal with the bidders...
Below is a short clip of Pauline in action:

The following photos show donated items from members of the church and local community: 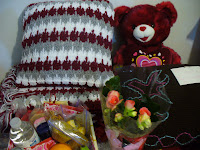 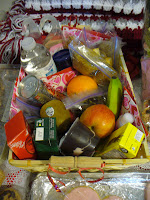 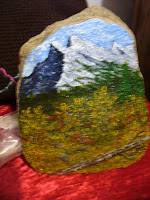 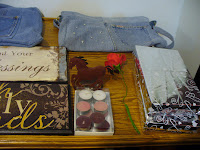 All ages of the church were represented beginning with the crocheted afghan and matching pillow from Rose, to Carson's Brownie cakes with hand-pounded chocolate chips, home grown, homemade cherry sauce, white chocolate and whipped cream. 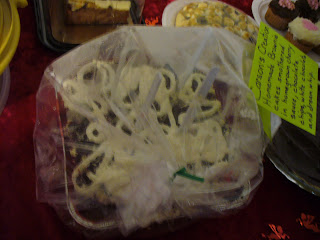 Truly this picture doesn't do justice to Carson's creation.


Feast your eyes on these delights: 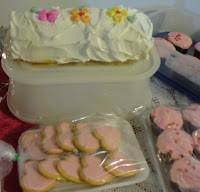 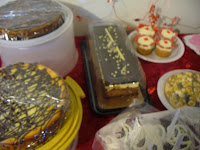 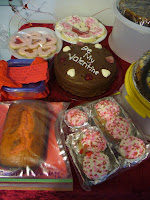 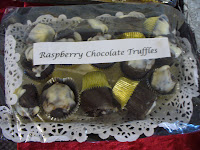 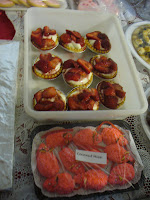 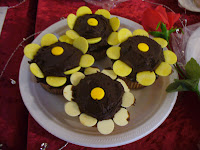 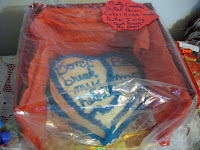 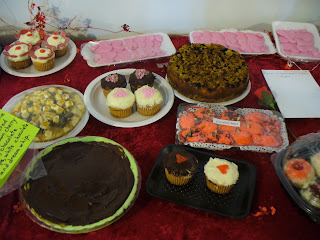 
Church on the Hill Youth would like to thank the following community members who contributed to the success of this night by donating items:
- Sluser's Garage, Glenavon
- Perras Family Foods, Glenavon

Thank you to all those families who contributed dessert goodies, especially when their kids don't attend youth get-togethers.

And as a church member, I'd like to thank the youth themselves for putting forth the effort to raise funds by baking, decorating, displaying and then cleaning up after this special event.

I apologize if I forgot anyone. Just let me know and I'll add you in.

I have a list of all monies raised for each item. If you want me to post it here, just let me know.

Posted by Anita, a member of Church on the Hill at 10:47 PM No comments:

Congratulations going out to Curtis and Amber on the birth of their new baby:

Baby and mom are both doing fine.
Posted by Anita, a member of Church on the Hill at 7:15 PM No comments: