Last Friday, the annual Valentine's Dessert Auction was held to raise funds for youth heading out on Street Invaders this coming summer. Church on the Hill youth and the youth group from Wolseley New Life Church brought a variety of delightful desserts to tempt our tastebuds. Led by youth leaders, Noelle and Tanya the evening promised to be a feast for the eyes as well as the stomach.

The following photos show the selection of items available for sale: 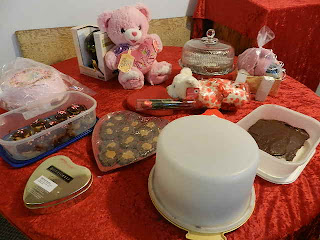 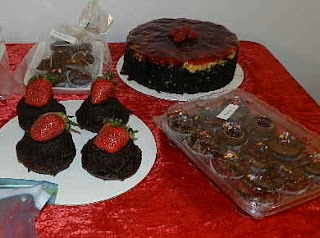 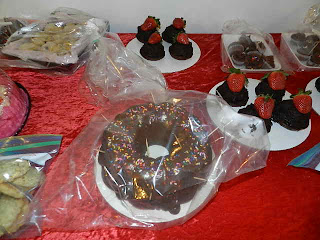 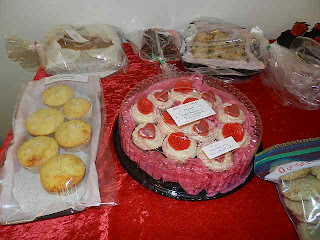 ﻿
Instead of importing entertainment for the evening, Noelle presented each table with a bare cake and an assortment of decorating supplies. No two bags contained the same supplies, and the idea was to decorate and then sell the cakes. Of course, whichever table's cake sold for the most would mean they won the decorating challenge.

I was sitting at a table with Pauline and Tammy and we must've looked quite capable because unlike the other perfectly baked cakes, this is what we had to start with: 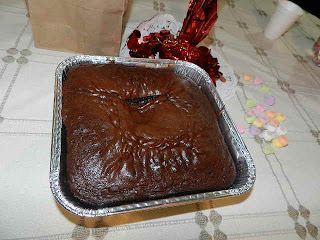 Not only did we prove ourselves capable of decorating, we were quite proud of our improvization... okay, it was Pauline's idea, but Tammy and I agreed. We didn't have many decorations and the table centrepiece was just sitting there... 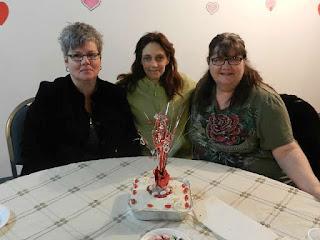 Everyone got into the act with their cakes: 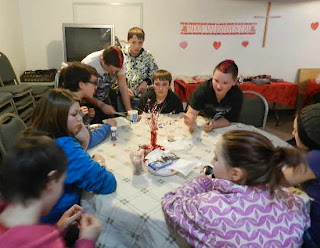 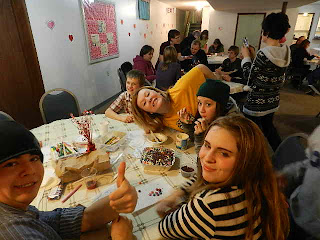 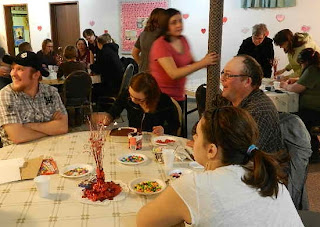 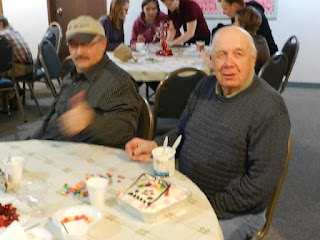 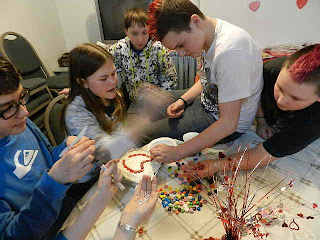 Having gone to Auctioneering School, Pauline Long Wright was our esteemed caller for the evening and wasted no time getting everyone's attention.

Because all proceeds were going to the youth, Pauline wanted to be sure she got every last bid, even if it meant getting up close and personal. 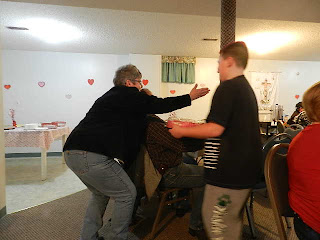 The desserts and items brought in by the kids were auctioned off first. As the crowd was calling for more, Pauline sold off the donated articles for a hefty sum. Finally, all that was left were the cakes we'd decorated right there. Hands flew up all over the room as the kids showed off their creations as they'd done throughout the evening. High bids for these cakes were  25, 25, 30, 45, 60 & 90 dollars. No, I don't recall whose cake took in what amount because they all looked delicious.  However, in case you were curious, the person who bought our cake was kind enough to leave the centrepiece behind. Thank you (in a singsong voice).
The Wolseley and COTHY youth groups would like to thank everyone who contributed in any way to the success of this night, from the people and businesses who donated items, to the people who spent their hard-earned cash to buy and therefore support the youth as they learn about living and sharing the Gospel in today's world.
Total money raised for the kids attending Street Invaders was $970.00
﻿And finally, thank you to Pauline. After a hectic evening of whistles and calling, Pauline had a chance to sit and relax. I took the opportunity to photograph her because she'd been moving so fast, the majority of my pictures of her are a blur.

Posted by Anita, a member of Church on the Hill at 12:18 PM No comments: