How Do We Please God?

Mike Zorn from Grenfell was our guest speaker on Sunday as Pastor Lorne and his family ministered with the Fellowship of Christian Cowboys Assoc. 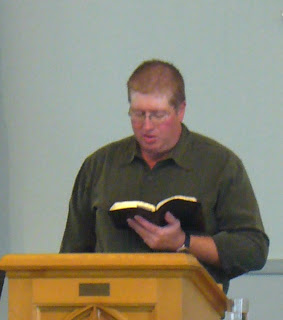 The message was based on I Samuel 9:27 to 10:13
Mike started the message by giving an apology. He said, as a Christian leader, he advises not to drink, swear, smoke, have pre-marital sex, etc. And he advises to pray, read the Bible, worship God and do all the things which we know will please god. But, he said, quite often even the preachers do some of those things. This fact has divided some churches.

He said there are different types of churches. Some churches are squeaky clean where you’re frowned upon if you drink alcohol, smoke tobacco products, attend movie theatres or participate in dances, etc.

He said if you’re a member of a Pentecostal church you probably go to the odd movie that Jesus wouldn’t like, or even have a bottle of liquor in the house. At least hidden from the pastor. (chuckles). Other religions allow you to be out drinking and swearing even with the pastor.

But how do the kids see us? We preach God values but we don’t live them. Mike said he wants to be honest as a Christian leader but he spends most of his life telling the youth in the centre not to do this and that. He wants perfect kids so people will send in lots of money to support the youth centre. They won’t support the centre if kids are drunk, stoned, or walk around swearing.

But is this how we please God? Mike said sometimes he puts conditions for the kids to please him as the centre leader, or for the pastors or even the town elders.

But how do you please God? Way back when, cavemen saw thunder and thought the gods were angry. They attributed crop failures, lack of deer for hunting, disease, etc to the gods being angry with them. Even in the Old Testament, we read that if someone did this, God would be happy. Yet the Bible is filled with people who didn’t do what God would have liked.

You can’t do enough for God. In the New Testament we live in grace. Jesus paid our way. His blessing is complete. Yet we’ve traded one set of rules for another.

What do we do to please God? If things go bad, what do we do not to displease God?
What is sin? Sin is different for everyone. For Mike, sin is anything that displeases God.

So what displeases God? Mike said anything we do that hurts ourselves, others or God displeases God. That is sin in the simplest of definitions. He said as humans we want simple steps. We say, ‘Tell me what to do so I won’t sin any more.’ We need someone to tell us what to do. We watch commercials and believe what they tell us. That if we buy Tide laundry detergent, we’ll have perfectly clean children. If we shave with a Gillette shaver women will want to touch our face. If we drive a Pontiac vehicle, we’ll live an exciting life.

We want God to give us 3 simple rules we can follow for the rest of our lives. But 2 hrs after a sermon, if you ask the average person, they can’t remember the message. Yet, the same people will watch a movie and 2 months later, they’ll remember some of the scenes and maybe even some lines.

The Bible is 90 % stories and 10 teachings. The Bible is filled with fallen people. Yet we expect our lives to be different. We learn by experience. By falling and getti

ng up again. That’s how we learn. The Bible is filled with people who had a heart after God and yet they struggled through life. Other people didn’t have a heart after God and their life showed it. Our life is meant to be lived as a story and there are no easy steps. God wants us to live from the place in our heart.

Mike said he likes live entertainment like concerts. The best speakers or entertainers don’t need to be good but need to speak or sing from their heart. He knows 2 people who sing. One sings with symphonies and is a perfect singer, with an amazing voice that sounds good to the ear but she sings from her head. But another friend has no training except piano and sings from her heart. She isn’t as polished but when she sits down to sing, something is going through the audience. She has a connection with them. A good entertainer speaks through the heart. People latch onto that.

In the Bible, we have a group of people who had a heart for God and yet they struggled with life.

- David was called a man after God’s own heart and yet he committed adultery and murder.
- Solomon was the wisest man who ever lived yet he spent his life seeking material possessions.
- Peter was a peace loving disciple and a hero of the bible and yet he lopped off a man’s ear.
- Samson was the strongest man ever and yet he chose a woman over God.

And still, we think we have to be perfect to please God. Mike said it dawned on him one day as he read the Creation account in Genesis. God created light and dark on first day. But he didn’t create the sun and stars until the 3rd day. Our light and darkness isn’t the same as God’s idea. Our thinking is backwards to God’s thinking. So often we think we’ll do this and this to please God and He’ll be happy. People with kids – you place rules out of love. You care for them and you want them to turn out good, but when they break the conditions, do you hate them? No. Your love is unconditional as far as human love goes.

Yet when it comes to God, we think it‘s conditional on what we do or think. That’s so far from the truth. Unconditional. The only condition to God’s love is: Will you accept His love? He wants to shower it on you. Yes, He gives us rules, but it’s so we don’t hurt ourselves.

Is our heart seeking God? How’s our personal relationship with Him? Don’t worry about the outcome – it will flow naturally if you are with God.

Remember Saul? His heart started to turn from God. Mike said he realized it was his pride that led to Saul’s downfall. At the beginning, he was head and shoulders above every one else. He was the chosen one. Annointed even. Saul met Samuel and Samuel said come with me. God sent you for a different purpose (v9) And God gave Saul another heart and he started prophesying with the prophets. And v11 says everyone who knew him wondered what was going on because he was acting so differently.

God’s Spirit wants to dwell in us. We need to ask God to give us a new heart. As we live out of that place, the rest of our lives will be perfect. If you look back in the Bible, Joseph’s dream wasn’t fulfilled for decades. Yet God’s hand was on Joseph as his heart was after God.

You will struggle but God will be with you. As you live for God, people will notice. As we live out of that place with a heart hungry for God, we’ll make a difference in people’s lives.

Heb 8:10-12 says, ‘10 This is the covenant I will make with the house of Israel after that time, declares the Lord. I will put my laws in their minds and write them on their hearts. I will be their God, and they will be my people. 11No longer will a man teach his neighbor, or a man his brother, saying, 'Know the Lord,' because they will all know me, from the least of them to the greatest. 12For I will forgive their wickedness and will remember their sins no more."

Remember the parable of the 2 men who built their houses on rock and sand? They did the same work on their houses but one man heard the voice of the Lord and listened. His house was like Him and it stood. The other man heard God and didn’t pay attention. His house crumbled.

That’s the key to success in your life. Listen when God speaks. Run after God and listen. Don’t worry about what we do all the time.

Mike is Operations Director of the Kipling Youth Centre. If you would like to speak with him about this post or his youth ministry, please email him.
Posted by Anita, a member of Church on the Hill at 11:02 PM