Blessed By the Rawling Brothers Concert 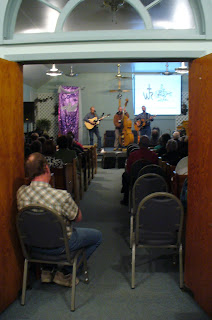 Church on the Hill was filled to capacity Sat night when the Rawling Brothers from Alberta blessed us with an eclectric mix of songs from old standsards to their own creations. 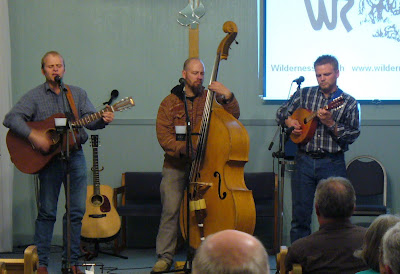 Doug said the Rawling Brothers all have a Rawling last name and they're all brothers but not to each other.
Bruce (on the right) is from Taber Alberta and he's Doug’s brother.
Doug (on the left) lives west of Pincher Creek and he's Bruce’s brother. (Laughter)
Mark (in the middle) is from Wainwright and is a brother to Doug’s daughters (Doug’s son) heh.

After a couple songs, Doug Rawling (on the left) said we have to give Pastor Lorne some slack because he flew back from Australia yesterday so if we hear him snoring during the concert, it’s okay. (Laughter)

Doug says he comes from the Southwest corner of Alberta and wanted to tell us about an old bachelor friend he has there. He said the old cowboy's name is George and this next song was dedicated to him. George lives in a house that's no bigger than the church dais with only cold running water and an outhouse. But George told Doug he had to work hard when he was young so Doug could be ‘set’ like George when he was George's age.
Doug said we all have a story to tell and the author of life who gave us each a story, knows each of our lives.
Song: The Last of the Horseback Kid. 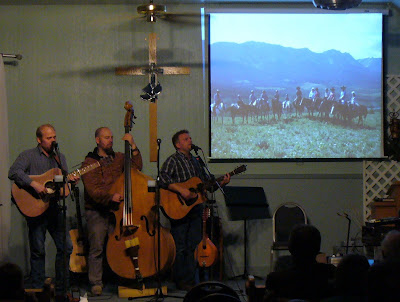 Doug: Said they run a camp called Wilderness Ranch out near Pincher Creek where they take kids on horseback rides. Some family camps, too. He said he used to spend a lot of summers going to Bible camp. It's so important to have kids in an environment where they know they are loved even when they mess up. Some kids only see black asphalt and video games and it’s easy to see that God is really big when you’re out country he made.
Song: Life of a Cowboy with Wilderness Ranch slideshow

Doug said this is their 4th time playing in Glenavon now and it feels like home. He said we have a awesome pastor and they really enjoyed having a meal at Pastor Lorne's place.
He said the Bible says we are to give thanks - all the time in all circumstances. If our day is going great or terrible, we are supposed to be thankful people. Some days we wonder what is there to be thankful for, but if we believe Jesus came to this earth to die on the cross so we can be forgiven and our sins taken away, then there’s always something to be thankful for.
Song: Keep on the Sunny Side 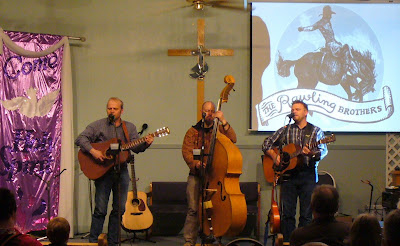 Doug says he's been a grandpa since last May and it’s fun. His granddaughter is 9 months old and she thinks she’s big and tries to do things by herself but can only crawl and needs help. Sometimes we think we’re pretty tough and can face the world alone and we break off too much to chew but it’s good that we have someone there – like Grandpa – and God to lean on.
Song: Leaning on the Everlasting Arms

Jesus fed 5,000 people with a little boy’s lunch. You don’t need to do it alone. Give it to Jesus and He’ll make it big enough for everyone.
Song: Sombbody (written by Mark)

Song: I Saw the Light

Doug said it’s funny how you can play the same song over and over and still have fun playing it.

Instrumental: Foggy Mountain Breakdown with Doug on harmonica, Mark on bass, and Bruce on 6 string guitar pretending it was a banjo. They sounded great. 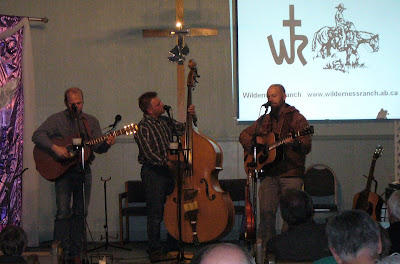 Doug said the songs tonight are pretty old tunes, some older than others and one is older than all the audience put together. It was written long ago by David the King who wrote some songs in the Bible called Psalms.
Song: I Lift Mine Eyes Up (Sung and played by Mark now on guitar.)

Doug said at Easter, Jesus came riding into Jerusalem on a donkey. The prophesy said the king would come riding on a donkey. The place when crazy. "Hosanna!" they called. Doug thought it meant ‘Yay, God!’, but it means ‘Save Now'. The Jews didn’t think He should come just to die. They wanted Him to kick the Romans out and make Israel a great nation. ‘Save now son of David’. There are times in our life we didn’t know which way was up. In our heart of hearts we cry out ‘Hosanna!’ If you cry it out, God will hear your prayer. Doug said when he's going through a difficult period, it’s reassuring to know even Jesus cried out on the cross, "My God, my God, why have you forsaken me?" (Matt 27:46) No matter what, we can still rest in Him. Doug wonders when God will say enough is enough and send Jesus back to us. He is the great Redeemer.
Song: Hosanna

Bruce said he wrote this next song in a time of his life when he needed to be ‘Saved Now’. Everyone experiences those difficult times. Bruce wants to focus on the fact God is bigger than our difficult times. That’s an awesome thing.
Song: Peace Like an Ocean

Doug said he appreciates everyone here tonight as well as the family who travels with him.

Song: How Great Thou Art (Love offering taken)
Song: In the Sweet By and By

Bruce said Jesus has been rock steady in the lives of the Rawling Brothers. He’s been steady and faithful and dependable. If you don’t know how good a friend Jesus is, then Bruce wants to encourage you to get to know Him. Invite Him into your life to be your friend and Savior and find out how rock steady He is.
Song: Rock Steady

Pastor Lorne said the Rawling Brothers weren't done yet as they will be doing worship during the service tomorrow morning here at Church on the Hill in Glenavon.

He then lead us in a prayer and said if there was anyone who wanted a personal relationship with Jesus to pray a simple prayer asking Jesus into your heart.
Posted by Anita, a member of Church on the Hill at 11:09 PM