Congratulations going out in a big way to Pastor Lorne and Dianne as you celebrate your 50th year of matrimony. 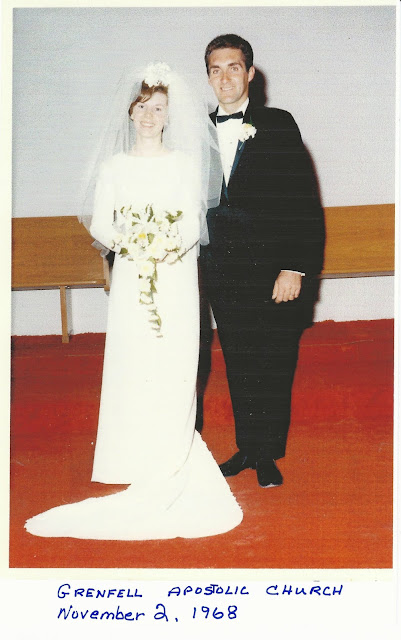 Thank you for allowing us to share your special night with family, friends and neighbours. You are a blessing to the community as well as the church and we pray that you'll enjoy your time together for many years to come.


In 1984 when the congregation of Church on the Hill bought the Summerberry United church and moved it to its present location where we’re gathered today, we inherited the stained-glass window you see here.
To commemorate today’s 100th anniversary of the end of WW1, I would like to introduce you to the man in the window: 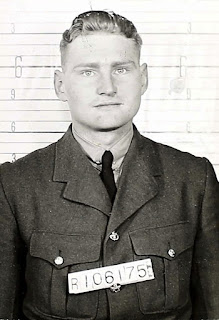 In 1920, James was born to James and Jennie May McCowan who farmed near Summerberry, Saskatchewan.

At the age of 18, James attended Success Business College in Winnipeg. After completing the Executive Secretarial Course, he stayed and took a job as a clerk at Canada Packers. He was also a member of No 10 Reserve Signals from Aug 1940 until May 20, '41.

And then on May 21, 1941, James took the Oath of Allegiance and became a full-time member of the
RCAF.

His attestation papers reveal that he had no flying experience and no special qualifications or hobbies considered useful to the RCAF. Instead, he liked to ride, swim, golf, and play tennis. References concerning his trustworthiness, ability, and high character from the General Superintendent of the Canadian Consolidated Grain Co Ltd, and the Office Manager of Canada Packers Limited, are included in his Service file.

After passing a medical test, James Gordon McCowan was fit for overseas duty and ready to commence training at a British Commonwealth Air Training Plan facility (BCATP) somewhere in Canada.

There follows a two month period of Leave Without Pay where he may have gone back to Summerberry to spend time with his family while awaiting basic training.

On July 24, 1941, he arrived at 2 Manning Depot (MD) in Brandon where he learned how to shine boots, polish buttons, bathe and behave as a member of the force. Along with P.T., he learned drill, which is how to march with and without a rifle, as well as how to salute. He also underwent an aptitude test and classification test to see if he was suited for aircrew or ground crew.

On Sep 26th, James arrived at 2 Initial Training School (ITS) Regina for the start of flight training. As well as Flying Theory, he learned algebra, trigonometry, meteorology, and navigation. Air Force administration and duties of an officer were included, and he underwent more physical and mental exams. The highlights of his ITS training would have been a session in the decompression chamber, and a "test flight" in a Link Trainer, such as the one shown here at the Royal Aviation Museum of Western Canada (formerly the Western Canada Aviation Museum):

On Nov 22nd, James arrived at 2 Elementary Flight Training School (EFTS) Fort William, Ontario, for 50 hours basic flying instruction. The aircraft you flew depended on the EFTS you attended and at Fort William, at the head of Lake Superior, they flew the de Havilland Tiger Moth, which was known as a "robust little machine".  The Royal Air Museum of Western Canada has a de Havilland Canada DH.82C Tiger Moth on display with skis.


On Jan 31 of 1942, James arrived back at 2 MD Brandon for a month while awaiting his next course. His Service record shows he was on Special Leave for the first two weeks of Feb although it doesn't explain why.

On Feb 28, 1942, he arrived at 11 Service Flying Training School (SFTS) for 8 weeks of intermediate training, followed by 6 weeks of advanced training. Aircraft used for this training was the North American Harvard, Avro Anson, and the Cessna Crane.

It must have been an exciting time for James, flying over the checkerboard prairie with only weeks to go before graduating and then heading overseas to join the fight. But danger wasn't that far from many Canadians because it seemed every newspaper carried news of training accidents, regardless of the military branch, with aircraft falling from the skies without notice. 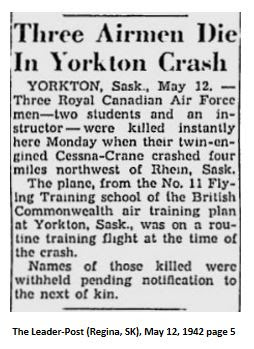 And when the names were released on the front page of the Leader-Post, we find a familiar one: 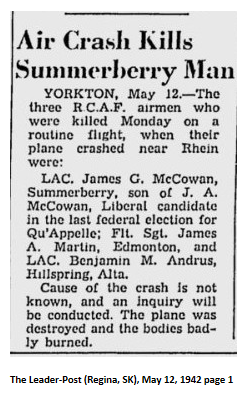 LAC James Gordon McCowan was buried in the Summerberry Cemetery where a memorial with military honours marks his grave:


Also buried in the Summerberry Cemetery is James's navigator cousin, Flt Sgt George McCowan King, who died Sep 1943 after his aircraft was hit by enemy fire, exploded upon impact, and crashed in Germany.

George's name is inscribed on the shared memorial with his parents to the right of James's Memorial in the above image.

Both boys were awarded the WW2 War Medal for serving 28 days of continuous service in the Armed Forces during 1939-1945.

Both boys were also awarded the Canadian Volunteer Service Medal (CVSM), although only George received the silver bar, or clasp, which designated 60 or more days service outside of Canada.

In 1950 when the Summerberry United church congregation rebuilt their church after fire devasted the original stone one, Mr. and Mrs. James Alexander McCowan donated the stained-glass window that bears a memorial for their only son:

IN LOVING MEMORY OF OUR ONLY SON, JAMES GORDON McCOWAN R.C.A.F. AGE 22 YEARS, WHO PAID THE SUPREME SACRIFICE MAY 11, 1942. "AT THE GOING DOWN OF THE SUN AND IN THE MORNING, WE WILL REMEMBER THEM." 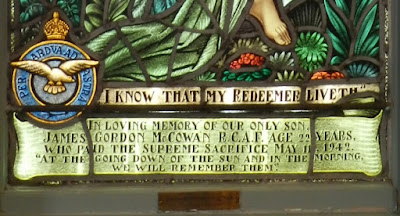 The scripture, I KNOW MY REDEEMER LIVETH, is from Job 19:25 which speaks of Christ's return to earth.

Included is the Royal Canadian Air Force crest which was used until updated in 1968. It bears St. Edward’s Crown and an eagle, surrounded by the motto: Per Ardua Ad Astra which is Latin for "Through adversity to the stars".

A brass plaque which is attached to the window frame says,
ERECTED BY FATHER AND MOTHER
J.A. AND MAY McCOWAN

As mentioned earlier, the Summerberry church was sold and moved to Glenavon with the precious window intact. At this time, I have no information on the creator of this stained-glass window, but I'll keep searching.

However, my research did uncover one interesting tidbit about James's mother, May McCowan. I somehow found a quilt created by her in The United Kingdom Quilt Museum in York, England. The description which accompanies the donor card says, "This quilt was given to Maureen Hill’s family when she was about 12 or 13 years old in 1944/5. Their house in East Ham, London, was damaged by a V2 bomb, and the family was re-housed and given new bedding."

Maker:
Mrs J. A. McCowan
Date:
1939 - 1945
This simple fan shaped design quilt contains a mixture of printed cottons in half the square and plain cotton on the other. In the corner is a rare piece of information - the maker’s name and address, embroidered in yellow thread. It reads ‘Mrs A. McCowan, Summerberry, Sask, Can.’ The quilt was made by a member of the Imperial Order of the Daughters of the Empire, a charitable organisation like the Red Cross who sent over supplies and aid to Britain during the First and Second World Wars.

We don't know when May McCowan made the quilt, whether it was before or after her son's death, but I like to think she found solace in sewing the quilt while remembering the life of her only son.

This post is an expanded version of the presentation given to Church on the Hill in Glenavon on November 11th, 2018.

Posted by Anita, a member of Church on the Hill at 12:28 PM No comments: