The Privileged to Serve 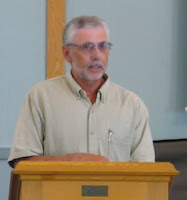 On Feb 28, 2010 Maurice Giroux of Montmartre spoke on The Privileged to Serve.

Maurice started his message by referring to Gary Inrig’s book, The Parables: Understanding What Jesus Meant as it pertained to the American Bill Borden. His parents were descended from the British aristocracy and his dad made his fortune in the Colorado silver mines, so by the time Bill was 21 yrs old in 1908, he was already worth a million dollars which equates to 40 million dollars today. The book continues with, “But in 1912, at the age of 25, Bill Borden did two things that made headlines. First, he gave away his entire fortune, half to God’s work in the United States and half to missions overseas. Second, he chose to set sail for missionary work among the Muslims, first in Egypt to learn Arabic and then, ultimately, to a remote part of China. To the public and the media, and even to many of his Christian friends, Borden’s actions seemed incredibly wasteful, especially when he died of cerebrospinal meningitis shortly after reaching Cairo. He had apparently thrown away his money, his career, and even his life. To what end?”

Maurice said he had a good friend who died recently. Although this man only had a Gr 6 education, he said he’d completed Gr. 12. He farmed and auctioneered. And he kept renting more and more land. He wanted lots of land and machinery and he worked day and night to keep up with all the work from having that much land and machinery. He wanted to win the 649 lottery so he could buy all new equipment. But his health declined. He went through 3 failed marriages and was living common-law. And he started to let his land go. Maurice said he would minister to his friend but the guy just couldn’t seem to connect with God. He died waiting for a double lung and heart transplant operation.

Maurice said the book of Job is a conversation between God and Satan. Does Job fear God for nothing? That accusation is powerful and disquieting and even modern. Why do you serve? For His blessings? There’s no need to be embarrassed by God’s blessings, but is that your motivation? If it is, then your enthusiasm will be thin in difficult times. We need something more solid to hold us.

Matt 19:17 says, “Why do you ask me about what is good?" Jesus replied. "There is only One who is good. If you want to enter life, obey the commandments.” Maurice says Jesus is trying to teach that all men are sinners. Jesus is referring to mosaic law where God commanded us to obey the ten commandments. This is the standard required by God. You can’t get into heaven doing it alone, or by religious means, or by your own terms.

Matt 19:21-24 says, "Jesus answered, "If you want to be perfect, go, sell your possessions and give to the poor, and you will have treasure in heaven. Then come, follow me." When the young man heard this, he went away sad, because he had great wealth. Then Jesus said to his disciples, "I tell you the truth, it is hard for a rich man to enter the kingdom of heaven. Again I tell you, it is easier for a camel to go through the eye of a needle than for a rich man to enter the kingdom of God." Maurice said Jesus is trying to expose the rich man’s heart. Jesus already knew it which is why He brought it up. The guy wanted to continue doing it his way where his money was ruling him and not the other way around. The analogy is anything that big will not fit through anything that small. 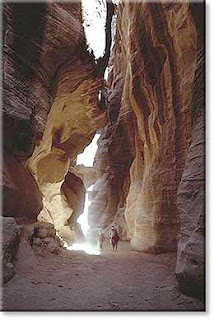 The needle Jesus is talking about refers to a mountain range with a small opening on the border between 2 countries. (Petra, Jordan) You could shave several days travel on foot if you go through the opening, but a camel couldn’t fit through it. Caravans must detour several days to weeks to go around the mountain range.

Maurice said maybe Jesus is trying to tell us our religious ways are the camel. They won’t get us into heaven. We must go through the mountain range to get to heaven but we can’t go through with all our worldly baggage. Salvation is grace alone, thru faith alone in Jesus Christ alone. Maurice said we should hang onto this whether we have doctrinal issues with others. If they don’t have this message, they’re missing the point. If you picture a table cluttered with dishes, that statement should be your centerpiece and if you need to move some dishes to make it fit, then do so.

Matt 19:27 says, Peter answered him, "We have left everything to follow you! What then will there be for us?" The disciples are trying to understand Jesus’ teachings from an earthly perspective. They are desperately trying to connect the dots. They already walked away from their earthly possessions and they’re following Jesus but they keep asking, what’s in it for me?

Matt 20:1-16 is the parable about the vineyard owner and his workers. Maurice believes that story clearly talks about anyone coming to Christ for salvation. In the parable, it didn’t matter if they worked one hour or 12 hrs, they were all paid the same. Some people come to Christ when they’re young and have 50-60 hrs serving God but others come later on. The last group are not denied the Kingdom of God regardless of when they accepted.

Maurice said we read in the 2nd chapter of Acts where the apostles became empowered with the Holy Spirit and dedicated their lives to serving Christ. But Maurice read about the fate of the Apostles in Sincerely Yours Vol Five The Book of Acts by Ann Mainse. All of their deaths were premature and not pleasant:
- John fared the best and died from extreme old age
- Judas – suicide
- Peter – crucified by Nero
- Andrew – died on a cross
- James the younger brother of Jesus –thrown from the pinnacle of the temple and beaten
- James the son of Zebedee – beheaded
-Matthew- killed by an axe in North Aftrica
- Thomas – lanced in Indies
- Simon – died on a cross in Persia
- Batholomen – was flayed alive (skin ripped off)
And they all died because they were spreading the gospel.

Maurice referred us back to The Parables: Understanding What Jesus Meant where Gary Inrig talks about David Livingstone in Africa. The missionary said ‘I personally have never ceased to rejoice that God has entrusted me with the service’ and ‘can this be a sacrifice if we give Him back what we owe Him?’ He said it was a privilege not a sacrifice to do God’s work.

When Beth Moore was called to comment on her missionary work she referred to Heb 12:1&2 which says, “Therefore, since we are surrounded by such a great cloud of witnesses, let us throw off everything that hinders and the sin that so easily entangles, and let us run with perseverance the race marked out for us. Let us fix our eyes on Jesus, the author and perfecter of our faith, who for the joy set before him endured the cross, scorning its shame, and sat down at the right hand of the throne of God.” When she was commenting on that passage, she said, ‘instead of running a foot race, what if it was by car and you had to cross the finish line without any blemishes on your car?’ That’s hard to do if you’re in a car that’s gone done dirt trails and rabbit trails. And if you’re spreading God’s word, there will be times people will broad side you.

What will your car look like when you cross the finish line?
Posted by Anita, a member of Church on the Hill at 12:47 AM