His Plan is to Bless Us: Part 1 - Why Would God Withhold His Blessing?

On Sunday July 20th, Pastor Dave Hepburn drove all the way from W 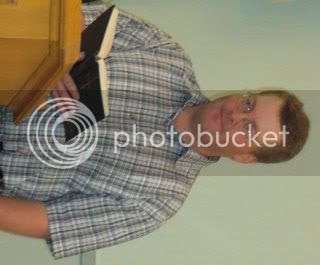 hitewood to give us the message. The music was led by Jessica who came from the Circle Square Ranch (CSR) with a couple staff members. If it hadn’t been for Kathy and Murray, and the people listed above, the church would’ve been empty. I was unable to attend so I gave my hubby my voice recorder in the hopes he could but he had too much work and couldn’t get away. So, I’m sorry, but no blog post for last week.

Last Sun, July 27th, Pastor Lorne and his family and Eva were at the Swan River Rodeo with the Canadian Christian Cowboys. Pastor Dave again drove from Whitewood but this time most of the regulars members were in attendance. When the young staff from CSR joined us, the church looked quite full so I’m glad Pastor Dave decided to give us a second chance.

When Pastor Dave stood behind the pulpit, he said he wondered if he could give a long sermon because there were 2 glasses of water in front of him. (One had been for Lori who led worship) Now the only response I have to his statement is this: Writing up this blog entry I had a choice – cut out some of the content, scriptures, etc or divide it into 2 blog posts to read everything he said on Sunday. Because everything he said is of value and I don’t’ know who God intended to hear the message, I’ve opted to divide the past in two. The 2nd part will be posted in a couple days.

Pastor Dave started his message by telling us about a friend who’d visited him recently. His friend isn’t a Christian and he started talking about his wife going to see a physic because the physic could tell her things about her past and apparently told her things right down to the T. The wife believed the physic had the power to heal. Pastor Dave thought that was interesting. He said the enemy has power but he was there to tell us that our God is all-powerful and has power over the enemy. But he said, not only is our God all-powerful, He loves us with a love that will never end.

He asked us to open our Bibles to Prov 10:22. ‘The blessing of the LORD brings wealth, and He adds no trouble to it.’ God wants to pour out His blessing into the lives of His people. Pastor Dave said God wants to add to the blessings of every person sitting there as well as into the lives of His people no matter where they are. And He doesn’t want to add it sorrow with it.

Pastor Dave said he wants to pass on 5 things that withhold God’s blessing from us.

The first reason we don’t receive God’s blessings is if we don’t believe God.

Pastor Dave said to turn to Matt 13:53-58 where it talks about Jesus going back to Nazareth, his hometown. Jesus preached in the synagogue and in the countryside to crowds in the thousands, walked on the water, healed the sick, raised the dead. And yet when He got to His own area, the people were more concerned with who His father, mother, brother and sister were. Because they knew who He was, they wouldn’t receive what He wanted to give. Unbelief hindered Jesus from doing great and mighty things in His own homeland. Pastor Dave added that last week he spoke of a double-minded person and how they can’t expect anything from the Lord because of unbelief.

Second, the blessing of God is withheld from people because they don’t have God.

James 4:3 says, ‘When you ask, you do not receive, because you ask with wrong motives, that you may spend what you get on your pleasures.' Pastor Dave used this scenario: What if he asks God for a million dollars so he can buy a new car, new stereo, etc so he can keep buying stuff for himself without using the money for God’ s Kingdom? He said if we ask God with improper motives, the answer is no, as well. When we come to God, we need to ask for His blessing to be in our lives because He wants to bless us in greater ways that we even can understand but we can’t be selfish in our requests.

Another reason God’s blessing is withheld because we do it in our own strength and we don’t depend on God to be our strength. There’s times when we do things in our own strength and it falls flat and we don’t understand what happened. To illustrate this, Pastor Dave said he has a friend who never seeded on Sunday because it was the Sabbath, but all his friends did. Last year he seeded on Sunday as well and didn’t get a crop. He asked the Lord why his neighbors can seed on Sunday and he can’t. The Lord’s answer was, ‘Your friends already seem to have everything already but you have Me. They don’t have a heavenly home, or eternal life. They don’t have the blessings I bless you with.’ He put his faith in himself rather than God.

Elijah was a powerful man of God. He did many great things for God. When Elijah said it wouldn’t rain for 3 ½ years, it didn’t rain for 3 ½ years. 1 Kings 18 is the account of Elijah on top of Mount Carmel with 850 prophets of Baal and Asherah. They each had an altar with a sacrifice. In V24 Elijah says, ‘Then you call on the name of your god, and I will call on the name of the LORD. The god who answers by fire—he is God.’ The prophets agreed, calling on the name of Baal to help them and danced around the altar trying to get something started but by evening, nothing had happened. When it was Elijah’s turn, he put wood on his stone altar and laid the sacrifice on the wood. Then he had them pour 12 large containers of water over it. Then Elijah called for God and the Bible says, in v38 ‘Then the fire of the LORD fell and burned up the sacrifice, the wood, the stones and the soil, and also licked up the water in the trench.’ That’s a powerful God.

Yet, after this great victory over the prophets of Baal, when Elijah heard that Jezebel wanted to kill him 1 Kings 19, Elijah fled in fear. Pastor Dave said that happens many times. When you’ve just had a great victory and you’ve let down your guard, the enemy will sneak in and put doubt in your heart and mind. Elijah was so worried about Jezebel that in v4 he says, ‘..."I have had enough, LORD," he said. "Take my life; I am no better than my ancestors.’ But God wasn’t finished with Elijah who still had doubts. And even after that time of doubt, Elijah went on to do great and mighty things for God.

The 4th thing that can stop the blessings of God in your life is sin. Pastor Dave said King Solomon is an example of this. King Solomon had great blessings in his life and yet he started to follow and heed the strange gods of his wives. (1 Kings 11). Because he didn’t keep his eye on the one true God, he lost everything. The kingdom was given to his son but his son sinned as well by building altars for foreign Gods. In return, God took his family line.

Pastor Dave said let’s bring this closer to home: Sin in the life of a believer. He said we as Christians, can’t have the blessings of the Lord in our life if we walk in sin. Sin separates us from God’s will in our lives. That’s why we as Christians need to be living sacrifices wholly and acceptable to God.

God’s blessing can also be withheld when we withhold God’s portion back. Malachi 3:8-11 says, ‘Will a man rob God? Yet you rob me. But you ask, 'How do we rob you?' In tithes and offerings. Bring the whole tithe into the storehouse, that there may be food in my house. Test me in this," says the LORD Almighty, "and see if I will not throw open the floodgates of heaven and pour out so much blessing that you will not have room enough for it. 11 I will prevent pests from devouring your crops, and the vines in your fields will not cast their fruit," says the LORD Almighty.’

Pastor Dave said he wasn’t picking on anybody and he didn’t know who does or doesn’t tithe in church and it wasn’t him telling us that we don’t love God if we don’t tithe. He said God told Malachi who told us in the Bible and the Bible is the final authority on things.

Pastor Dave says this applies to himself as much as to the next person. He said he can’t say you need to do this. Each person needs to look at themselves and make sure what they’re doing pleases God. But he said when we’re obedient to God, he’ll pour out His blessing upon us and it will be so much we won’t be able to contain it.

If you would like to speak to Pastor Dave, please email me and I'll pass your msg along.

Comments are appreciated. If you’re not sure how, please click on ‘comments’ under 'Labels' in the right column.
-
Posted by Anita, a member of Church on the Hill at 2:43 PM